I have been researching Ackerman genealogy for close to 20 years as well as some of you.  When I started out I ran into brick walls. This hasn’t changed except the brick walls seemed to move.  I am on Ancestry, My Heritage and Family Search as well as several other pages. Needless to say I do spend a lot of time doing research.  One goal I have is to try and put it all together and create our story. I am basing our story off of our One Hundred Eighteen Years of Akerman Life book. Some of you have this book but many others do not. Years ago I started to create a new Akerman Life book, I got busy with other things so that took a back seat. So maybe we can get something together on a New Ackerman Life book. This website is the beginning stages of said book. At least maybe we can have it here. 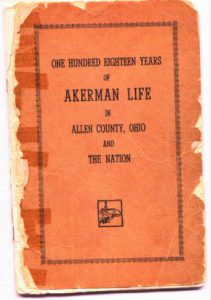 As you see my cover is pretty worn and ragged. This book was published in 1952 after two other publications 1934 and 1935. 118 years from 1952  puts the year at 1834. It is now 2020 and we are able to go back even further. Of course it says “in Allen County Ohio and The Nation” So I expect the cousins were only worried about or had information beginning in 1834.  We will venture further back. 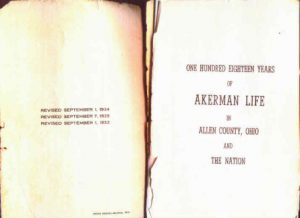 Here is the inside cover and first page. Notice the original publication and revisions. 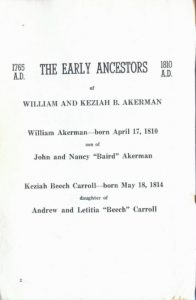 Here we have page 2 and is a bit confusing. We know the significance of the 1810 date. The 1810 date is the year William Akerman was born.  But what’s the significance of 1765? After lots of research we know that William’s father was John born in 1784 and recent discoveries we find his father Paul came to America in 1771. Now there were two Paul Ackerman’s in the area in the late 1700’s and it was hard to determine which one was our Paul. One Paul was born in 1750 and the other born in 1745 or 1755. That is still under research. However the 1750 Paul was Mennonite and according to my father our ancestors were Lutheran. And the 1745/55 Paul was Lutheran. This gives us another clue. Now this does not explain the 1765 date. Researching Nancy Baird I found a John Baird born in 1765.  This could be the reason for this date and I believe John Baird was Nancy’s father.

Now let’s look at the 118 years of Akerman Life cover, why 118 years? From the date the book was published, 1952, it places the year at 1834. Now they were going by Akerman’s in Allen County. William and Kaziah’s first child was born in 1834 which explains the date.

So some of the changes in the New Ackerman Life book will be to at least go back to Paul Ackerman (spelled this way on the ship). We’ll look at documents that proves that Paul is our ancestor. 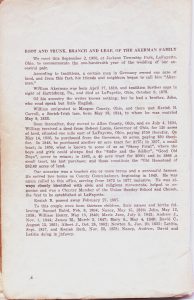 When the Ackerman Cousins first created the book they new little about John and Nancy.  However they do mention William had a brother John who spoke little English suggesting he was speaking German, why? From what we have found is that William did have a brother John.  However he was born two years after William which suggest he would have been speaking English. We also know his father John was second generation American being his father First generation Paul came to America in 1771. So I believe they got it wrong and it should be William’s father John spoke little English having been raised by Paul.

We are pretty sure that Nancy was a nickname for Anna or perhaps even a middle name. Many many women were named Anna and most went by their middle name.  Nancy was born in 1788 and was third generation. Current research show her father was John Baird and her grandfather as Thomas Baird or Beard.

John and Nancy had four children, Maria born in 1806, William born in 1810, John born in 1812 and Jane born in 1813. Since the book was published we have learned about the lines Maria, Jane and now learning about John Jr.

In a document Captain John Akerman son of William and Kaziah said that his great grandfather immigrated to America. That would be Paul Ackerman.

In the Will for Paul Ackerman he mentions his first four children John, Paul, Margret, and Catherina. Then mentions his three youngest children George, Henry and Abraham.

Some have Barbara as a child of Paul, however Barbara is the wife of Paul Jr.

Paul’s wife at the time of his death was Anna Margarethia Mengle or Mengel born in 1745. There are church records that indicate that they were married in 18 Mar 1800. Anna Margaretha was previously married to Archibald Olewine.

Many have Paul married to Maria Sophia Stern or Gail. However my research indicates that this was the other Paul Ackerman who was Mennonite. The children don’t match up.

The First Reformed Congregation at Lancaster, PA has Paul Ackerman Jr born issue of Paul and Anna Maria Ackerman. This also indicates Paul’s previous marriage to Anna Maria (last name unknown). I can find no record of their marriage, her birth or death.  They either divorced or she died prior to 1800.

I have two DNA matches to Ackermann in Germany.  Paul Ackermann 1852 – 15 Sep 1915 and Ida Helene Anne Moldenhauer 29 Jun 1872.  Unfortunately they don’t have much genealogy information.

Paul Ackerman born 1745* in presumably in Prussia (Germany) and traveled to America on Oct. 31, 1771 on the Brigantine Recovery, Bull, Master, from Rotterdam, last from Cowes. He settled in Cumberland County, PA.  This would make him *26 years old upon arrival in America.  Church records have him married to Anna Maria when Paul Jr was baptized in 1785. Paul married Anna Margaretha Mengle in 1800.  Paul died in 1804.

Henry and Abraham
Henry and Abraham along with George are mentioned in Paul’s Will as his three youngest children. Church marriage records indicate that Paul and Anna Margaretha didn’t marry until 1800. Abraham was born in 1801 after Paul and Anna were legally married. So the question what happened to Anna Maria?

George #2 Ackerman
George is listed in Paul’s will as one of this three youngest children. George, Henry and Abraham.

Note: Since Paul separated his older children from the younger children in his Will, it is my belief that it was because they were from the two different marriages. Also Paul was 55 when he married Anna Margaretha and died 4 years later in 1804.

I also have him as John Ackermann and John Henry Ackerman Sr.

Anna “Nancy” Baird was born possibly in 1788. I have her parents as John Bird and Rachael Beard. Nancy died about 1854 in Morgan County ,Ohio.

John and Nancy migrated to Morgan County, Ohio around 1815.